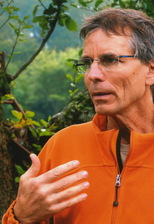 Born in 1959. In his youth he was organizing protest against Uranium mining in Southern Germany and nuclear power plants. Love for life led him to conscienciously object the armed service. He trained as a social worker in Kassel/Germany. In the 80s he was an intern at the Resource Center for Nonviolence in Santa Cruz and non-violent direct action trainer at Diablo Canyon Nuclear Power Plant protests. Back in Germany he was active in Europe in the 80s social change, environmental and non-violent direct action movement. He has organized and focalized international youth and protest camps throughout post cold-war Europe.

He was a founding member of GEN-Europe and later for three years its president. He is still active within the GEN network and was part of the initiation of the Ecovillage Design Education (EDE). He served as an adviser to the Baltic See Region "Ecovillages Project" financed by the EU.

In 1984 he joined the Bauhütte community which later became ZEGG. He is a founding member of ZEGG. Since 30 years he is a ZEGG-Forum teacher and consultant for community projects all over the world. He has been teaching integral Forum and awareness training in German, English and Spanish including Worldwork, "the work that reconnects" and others. He is motivated by a deep caring, compassion and love for people and life. Achim always seeks new edges to learn and teach.

At ZEGG he is the chief landscape designer creating fertile soil and an edible landscape on glacial sand using intuition and Permaculture knowledge. He studied Permaculture with Fukuoka in Greece and with many others in Germany. He also works as an eco builder on the multi-facetted challenges of retrofitting and insulating existing houses with renewable materials. He is engaged with Terra Preta soils and using all local ressources for its production.

Achim has written a booklet on "Ecology and Sustainability at the ZEGG Community" where he describes the background of his ecological work and the applications at ZEGG.